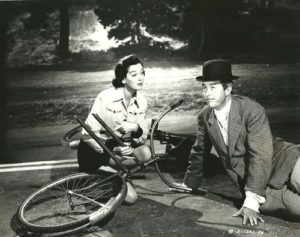 Violations of VC 23152 and VC 23153 (drunk driving, driving under the influence) are committed when someone drives a vehicle[i]  while under the influence of a drug or alcohol (or while having a blood alcohol level of 0.08 percent or more).  Common sense and the law tells us that self-propelled vehicles, or motor vehicles,[ii]  may not be operated under the influence.  Some of the motor vehicles specified under California law are motor trucks (VC 410), golf carts (VC 345), motorcycles (VC 400), and snowmobiles (VC 557). But California’s DUI laws apply to all vehicles – motorized or not.

Is it unlawful to operate a bicycle while under the influence?  YES. California Vehicle Code 670 says a vehicle is not a “device moved exclusively by human power,” but the Vehicle Code itself makes it clear that people who operate bicycles (including electric bicycles[iii], ) or pedicabs are subject to all the Rules of the Road, “including provisions concerning driving under the influence of alcoholic beverages or drugs.”[iv]  However, the punishment for DUI bicycle is only a $250 fine.[v]  Anyone convicted of DUI bicycle will suffer a driver’s license suspension of one year if they are between the ages of 13-21 at the time of the offense.[vi]

DUI horse?  NO.  DUI horse-drawn carriage?  PROBABLY.  A horse by itself is not a vehicle – animals are not “devices,” and ridden animals and pedestrians are categories of traffic separate from vehicles.[vii]  While VC 21050 says that people who ride horses are subject to the rules of the road, it omits the inclusive language of the bicycle statute regarding “provisions concerning driving under the influence of alcoholic beverages or drugs.”

What about wheelchairs?  NO. Pedestrians and vehicles are different types of traffic. Anyone classified as a pedestrian cannot be driving under the influence.  Pedestrians include those on foot and people who are operating wheelchairs (motorized or not), motorized tricycles, or motorized quadricycles, because they cannot get around on foot.[viii]   If you are using a Segway, hoverboard, or other “electric personal assistive mobility device” you are also considered a pedestrian.[ix]

DUI Boating, or BUI – YES. California Harbors and Navigation Code section 655 outlaws the operation or manipulation of any “vessel,” waterskis, an aquaplane, or “similar device” while under the influence of alcohol or drugs, with a blood alcohol level greater than 0.08 percent.  It is also unlawful to operate any non-recreational boat with a BAC over 0.04 percent. BUI causing bodily injury can be charged as a misdemeanor or as a felony.  The boat doesn’t have to be motorized or subject to registration, so kayaks, rowboats, and sailboats all fall within the BUI statute.  A BUI case calls for a unique defense – clearly, the standing field sobriety tests given in highway DUIs do not apply (ever hear of “sea legs?”) and science does not back up the seated battery of FSTs given in these cases.  There are also significant stressors unique to the open water such as heat, spray, and boat motion, that can affect a boater’s performance on the seated FSTs.[x]

DUI Flying – YES.  It is unlawful to operate an aircraft[xi] in air, ground, or water, or to parachute “for sport” while under the influence of drugs or alcohol.[xii]  It is also unlawful to operate an aircraft in air, water, or on the ground with a blood alcohol level of above 0.04 percent.[xiii]  It is unlikely that drones or other remote-controlled flying objects will be considered “aircraft.”

If you have been charged with one of these more unusual misdemeanor DUI offenses, contact the Los Angeles and Pasadena attorneys at THE LEVENTHAL FIRM.  From beer & boating to peyote & ponyrides, we’ve got you covered.  Know your rights, ride safe, and call our expert DUI and BUI lawyers for help.

[i] VC 670: A “vehicle” is a device by which any person or property may be propelled, moved, or drawn upon a highway, excepting a device moved exclusively by human power or used exclusively upon stationary rails or tracks.

[xi] Cal Public Utilities Code Section 21012: “Aircraft” means any manned contrivance used or designed for navigation of, or flight in, the air requiring certification and registration as prescribed by federal statute or regulation.