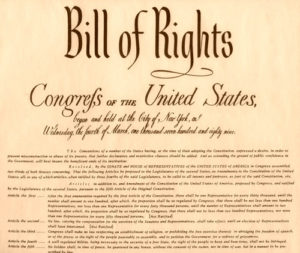 Purpose of This Blog-Series

I have decided to write a Series about our constitutional rights in a criminal law context.  My clients, colleagues, friends, and family members often ask me whether something a police officer did (or did not do) was “legal.”  My goal with this Series is to teach people what the police can and cannot do during the course and scope of their investigations.  In law school, this topic is fleshed out in a course called “criminal procedure.”  Criminal procedure focuses on several civil liberties or constitutional amendments,  which are all part of the sacred “Bill of Rights.”  The rights that we will focus on in this Series are sourced within the Fourth, Fifth, Sixth, and Fourteenth Amendments to the United States Constitution.  This Series will thus be broken down into chapters that relate to each Amendment.

Before we get into the meat (the Chapters to come), it is important to take a step back and further explain the basic premise of criminal procedure: Evidence obtained in violation of our constitutional rights is not admissible in court (Weeks v. United States, 232 U.S. 383 (1914);  Mapp v. Ohio, 367 U.S. 643 (1961)). In other words, if the police secure evidence against someone in violation of one of the aforementioned Amendments, they cannot use it in court. For example, if the police coerced a confession, they cannot use it; and, for example, if the police illegally found a weapon in someone’s car, they cannot use that in court either. But, what if that person is a guilty murderer? Can the police violate the guilty murderer’s rights to obtain that guilty evidence? The answer, theoretically, is no – the exclusionary rule is designed to deter the police from violating our rights.

The exclusionary rule is riddled with exceptions that I will talk about much later in this Series. The courts permit the police to use evidence in many instances, notwithstanding clear constitutional violations. In these exceptional situations, the courts are supposed to find that, notwithstanding the police illegality, exclusion would have little to zero deterrence value.  In practice, however, bench officers have a huge bias toward admissibility. Veteran defense lawyers share countless war stories describing judges that bend over backwards to justify the admission of otherwise illegally obtained evidence. When the client is a gang member with devil horns tattooed on his forehead, and the case deals with dead alleged victims, the exceptions to the exclusionary rule seem to broaden.

The Constitution only binds government actors. Thus, evidence that was procured purely by a private party does not implicate the Bill of Rights. The exclusionary rule has no application when the government was not involved in gathering the evidence. Burdeau v. McDowell, 256 U.S. 465 (1921), is the seminal decision on the state actor subject in a criminal procedure context. In Burdeau, people with no connection to the government searched through a private desk, found incriminating documents and turned them over to the authorities. The government did not participate in the search nor did it know it would happen. The search itself was wrongful, but because the government had nothing to do with it, the Fourth Amendment’s privacy protections were not activated.

Now, with all that said, let’s begin the Series!